Taking the Temperature as We Head Into the Holiday Season

Over the past number of years, more Canadian retailers have adopted Black Friday. Many stores have used the date to lure consumers and give them a head start on their holiday shopping. Not surprisingly, last year was different. In 2020, Black Friday sales fell significantly as a result of store capacity limits, closures and consumers’ fears of getting infected with COVID. However, data from Black Friday 2021 suggests that the situation has improved significantly from last year and signals better times ahead for retailers and for mall properties.

With this in mind, it’s a good opportunity to examine the state of retail in Canada as we get ready for the holiday season. It’s also a good chance to think about retail spaces and what current consumption patterns might mean for two key real assets in AIMCo’s portfolio, Square One and Yorkdale Mall. 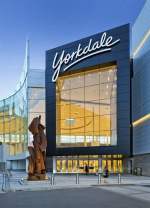 Ironically, the pandemic has created the recent surge in retail spending. Last year, many of us had to pass the time with house chores and episodes of Tiger King on Netflix. That meant many households weren’t out spending as much as they once were. Less money spent outside the home created excess savings and so did federal stimulus packages, such as the Canada Recovery Benefit (CRB). More dollars in consumers’ pockets has positively affected spending patterns.

The latest retail numbers from Statistics Canada indicate that Canadian retail sales in September were down 0.6% ($56.6 billion) from August. However, compared to two years earlier, six months before the pandemic started, spending in September was well above pre-pandemic levels. In fact, national retail sales have increased by around $5.5 billion or 10.6% from September 2019. Over that same two-year window, overall consumer prices have risen about 5% which demonstrates that retail spending has grown at a faster pace than overall prices. In other words, retail sales growth is not currently being led by inflation, but rather, by the consumer.

Additionally, a recent retail survey released by Jones Lang LaSalle (JLL) confirmed retail’s rise. The survey found that a large percentage of Canadians planned on increasing their gift- spending budget by 11% this year. Responses showed that more shoppers would spend at least $751 on gifts this holiday season, up from last year’s survey average. The same survey also found that 85% of Canadian consumers plan to shop at malls.

“Despite growth in online shopping, consumer spending at malls is expected to grow over the next few years and we have seen positive momentum to this effect recently,” said Stephen Kinsey, Portfolio Manager on AIMCo’s Real Estate team.

According to a recent Colliers survey of retail tenants, the number of retail tenants offering an e-commerce platform doubled during the pandemic, yet 77% of tenants reported profitability is highest with in-person shopping. This suggests to AIMCo’s Real Estate team that physical retail still plays, and will continue to play, an important role in tenants’ businesses. Rather than trying to abolish physical stores in favor of e-commerce, tenants are creatively optimizing their presence as a blend of physical stores and e-commerce platforms to create a positive customer experience.

Additionally, Canadian e-commerce benefitted greatly from COVID, particularly in the early days of the pandemic when stay-at-home restrictions were the most severe. But, in the third quarter of this year, total e-commerce sales were down 1.6% from one year earlier. This was the first time a three-month decline has occurred since Statistics Canada began reporting online shopping numbers. AIMCo’s view is that as we continue down this path towards “normalcy”, consumers will continue to desire human interaction and experiences that can’t be offered exclusively via e-commerce. Evidence of this is showing up through strong leasing momentum and directly from consumers in the form of improving foot traffic and sales.

In AIMCo’s case, this is good news for two prime assets in clients’ Real Estate portfolios, Square One and Yorkdale mall. According to Kinsey, the performance of these two assets over the Black Friday weekend was very encouraging and further demonstrated the trend that foot traffic is on the rise as more Canadians get vaccinated and worries of COVID decline. There is one potential hiccup, the new COVID-19 variant, Omicron. It’s still too early to determine Omicron’s effects on markets and on retailers and if consumers will once again prefer to shop from their beds.

However, there are a couple of things to keep in mind when it comes to Omicron and retail. First, the risk of lockdowns like we previously experienced is unlikely. We have more reliable tracing networks and dependable vaccines. Vaccine manufacturers, like Pfizer, have also expressed that they can update vaccines to match variants within just a couple of months. These are all advances we did not have in earlier months of the pandemic. We got through Delta and we will get through Omicron.

Second, there are some things that online shopping cannot give you. Figuring out your bathing suit size in European sizing when you don’t exercise as much as you used to is no easy feat. Jokes aside, malls and retail spaces are a part of retail’s future. Shopping for new shoes at the mall instead of online means that the risk of theft off your porch while you’re out walking the dog is very low. There’s also a social component. Going out for lunch, grabbing a coffee or a sitting down for a cocktail can be as much fun as getting that new shirt. And, lastly, as brands build their empires, many will go for more engaging, immersive experiences. Only malls and physical retail spaces can provide this type of service.

Physical retail locations have been catering to humans’ desires for decades and top-tier malls like Square One and Yorkdale, which provide a variety of destination retailers, differentiated food and beverage offerings and unique, shareable experiences that cannot be replicated online, will benefit from current and projected consumption patterns, as well as our need to interact in the physical world.